A very successful demonstration of honey extracting took place at the new Honey Kitchen at Scolton Manor on Sunday afternoon watched by over 70 people who crammed into the exhibition and extracting room. Paul Eades, the Apiary Manager, uncapped the frames, while John Dudman loaded the extractor and gave a running commentary to various groups, consisting of PBKA members and the public, who came in to watch the fun!

Lots of questions were asked by the observers present, and staff at Scolton Manor have indicated that an enormous amount of interest has been generated since the facility first opened in July. It is planned to do further demonstrations during the rest of this season (dates to be finalised) in order to build on this.

The Honey Kitchen is a commercial standard honey processing facility, which will be used for hygienically extracting and bottling association honey in accordance with Environmental Health regulations, as well as for training PBKA members and public demonstration.

PBKA members wishing to extract their own honey, can of course continue to hire the association extractor from the Apiary Manager by arrangement. 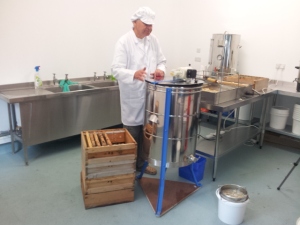